I've decided to build a new one for in the bedroom which is small and quiet.
Completely fanless looked difficult, so I decided to build something with 1 big fan on very low rpm.
Finding a suitable case was not easy, but I have found it in the AOpen S120 including the optional expansion unit designed for pci card which is going to contain the big fan: a 140mm Scythe Kaze Maru.

Here are some pics. I already cut out holes in the outer pastic casing for the grill and in the metal inner case for the fan.
I'm thinking about putting a dustfilter in between, because there's some space available.
I'm going to replace the bare metal bolts with black ones.

That's a nice looking case. I'll be curious about cooling the integrated 9300, especially if you are planning to run HD. It's a small space, but such a big fan should make it easier.
B

dcwp said:
That's a nice looking case. I'll be curious about cooling the integrated 9300, especially if you are planning to run HD. It's a small space, but such a big fan should make it easier.
Click to expand...

I'm planning to run HD, 1080p, but I don't know either what to expect cooling-wise and for powerconsumption.

I bought the medium speed (1200 rpm) fan version and a Zalman fan mate to conrol it. I hope that I can put it on 500rpm and it stays cool, but this way I have some headroom.
For power I bought a secondhand Dell 150w external powersupply, combined with the new 150w PicoPSU. Hopefully that will do.

The CPU is the Intel dual core E5200 (2x2500mhz). It should give plenty of power and when needed.. it can usually overclock very well.
B

First picture is revealing the holes that I made in the black plastic cover and the metal frame.
I'm using a grill from ACRyan and the fan is mounted with Nexus silicon mounts.

Considering dustfilter: I'm thinking about using a black mesh (ACRyan) for between fan and grill. It might be already enough for stopping some dust to enter the case.

Next is a picture of the inside of the case. The Zotac motherboard fits in, but everything is cramped in small space. I removed the 2 small fans which were on one side. The only fan in the case will be the big 14cm. The PicoPSU has a very tight fit between the memory and the powerswitch at the front side. Nothing is mounted yet.

I had a dissapointed with the second-hand powersupply, a 150w Dell ADP-150BB B. I thought it would be with 4pin powerconnector like this (Kycon KPPX-4P): 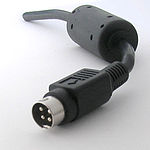 So I ordered a Kycon KPJX-PM-4S-S chassis connector for to build in the case. However, I discovered the connector to be a square shaped 6pin type. I guess only used by Dell.
I've removed this connector now. The DC powercable contains 6 wires. 2 of them (yellow,green) are obviously signal wires, because they're very thin. I discovered that when they're connected to ground then the powersupply switches on. The 2 thick red and braun wires then carry the 12v and the 2 thick black and white are ground.
I'm ordering a Kycon KPPX-4P. Hopefully it's not much trouble attaching it to the cable.

I've soldered the Kycon connector to the cable. It was not so easy, but doable thanks to pdf file from Kycon website. I just connected the wires to the pins like they're layout in the cable. Not like they're supposed to be normally: 2x 12v one side, 2x ground other side. The powersupply automatically switches on now, because I soldered the signal wires to the shielding inside the connector.

At the moment I'm preparing a piece of the black mesh to be sawed in a fitting shape. I've put it between 2 pieces of mdf. On the top mdf plate I've made a drawing of the top metal plate of the AOpen case with the fan hole and a hexagon shape covering it which is going to be sawed out. I'm going to bolt it all together, so nothing can move while sawing.

Did the mesh and it's in place.

New project: pci slot fan controller + power input connector.
Got this idea when I was searching for a suitable area to place the Kycon power input connector.
The Aopen pci expansion unit, which I'm using for as a fan housing , has a opening in the back for pci card connections. Using the metal from an old card I could make something in there.

Starting, I first removed the housing of the Zalman fanmate 2, because of the tight space. It only contained a small board with a 5v regulator+heatsink, 1 resistor and a potmeter. I drilled some holes in the metall strip and I fastened the small board, now minus the heatsink, to the metal with some metal wire.
Next to it I made holes for the power input connector, fastened it with screws and soldered on an 12v connector from an old powersupply.
Last picture shows assembled fan unit.

Finished the hardware today. Created some anti vibration for the 2.5 inch hd under the mb and installed an leftover intel cpu cooler. I realise that it's not the best in this situation.
I had some trouble with the blue power+hd Leds of the S120 case. 2 wires are labelled Hdd led + and power led - was missing..
First try didn't show any led on, after switching Hdd Led+ wires both are fine.

Now.. how to install winxp on there? no optical drive...

Did you say the HDD is mounted under the MoBo? Interesting arrangement. Is this common in Mini-ITX setups? I would think it would radiate heat up into the board. That might explain your relatively high temps???

As for the OS, it's sort of a pickle, ain't it. I suppose the options are to use an external optical drive or maybe install it on an external HDD using that shiny Vaio laptop, then clone the drive through the USB onto your internal drive. I'm sure there is an easier way, I'll be interested to see what you come up with there.
B

dcwp said:
Did you say the HDD is mounted under the MoBo? Interesting arrangement. Is this common in Mini-ITX setups? I would think it would radiate heat up into the board. That might explain your relatively high temps???

As for the OS, it's sort of a pickle, ain't it. I suppose the options are to use an external optical drive or maybe install it on an external HDD using that shiny Vaio laptop, then clone the drive through the USB onto your internal drive. I'm sure there is an easier way, I'll be interested to see what you come up with there.
Click to expand...

Yes, temps are high, aren't they? Interesting point about the hdd. Can't do anything about it if that's the case..

I let go of the Flash drive method. My usb stick (16gb) was to large for the required fat16 format.
Instead I opened up an old external usb drive, removed the harddisk, and attached an old cdrom drive to the ide interface. I changed in bios boot priority to usb-cdrom first and then I could start installing.
Only, winxp doesn't install without serialkey, so I'll have to wait until the ordered disks arrive.