It's taken a little while, but it's finished and running beautifully (both hardware and software!). It was built mid December 2005, and has been providing hours of enjoyment ever since

Shuttle SN95G5V3
Fantastic little box, doesn't get hot, and the auto speed control setting on the fans keeps it very, very quiet. Would much rather have this than a weird half height or a monster full size HTPC case.

Leadtek AGP 6600GT
Amazing card for the price, it's actually my second 6600GT. The first one was from Legend and was far too noisy, the Leadtek is as quiet as they come with a fan - I have the fan speed set at 50% and you can't hear it over the case (which you can barely hear from a metre anyway). Runs MP without raising a sweat, and the latest games look absolutely unbelievable.

Hauppauge 500MCE, two big Segate drives, 1GB RAM, onboard Optical Out (nothing wrong with onboard, don't have to use AC3Filter or anything), MCE Remote and MCE Keyboard, Nvidia PureVideo for DVD and TV (this thing is amazing)... Just the usual stuff.

Logitech Z5500 5.1 Speakers
Fantastic value for money, the bass is just amazing! Our lounge isn't that big, so it wasn't worth spending 3 - 4 times as much on a 'proper' setup with a Reciever and big speakers. Movies absolutely rock (literarily, the room shakes) and most music is great too - only downside is a lack of detail, which is sometimes frustrating with the odd movie (dinosaur fight in King Kong) and more often music. But hey, how much do you want for the money?

Sony HX32 32" CRT HDTV
I brought this at the start of 2005 (with a HTPC and gaming in mind), and have no regrets paying the extra over a SDTV - connected with Component at 720p, this thing looks stunning, and games are truly awesome (Doom 3 in the dark on the big screen with the graphics settings turned up scares the bejesus out of us, one girl had nightmares). I didn't - and still don't - have the money to justify a big HD LCD or Plasma, and if you ignore the size of the damn thing (and the joys of overscan) the picture still leaves them for dead.

New photos from when I swapped the 250GB IDE drive for a 320GB SATA. New photos of the setup when the sun comes out again! 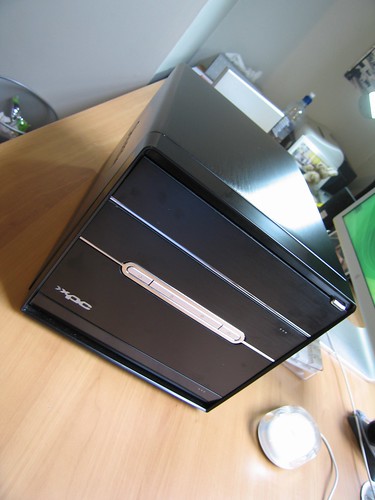 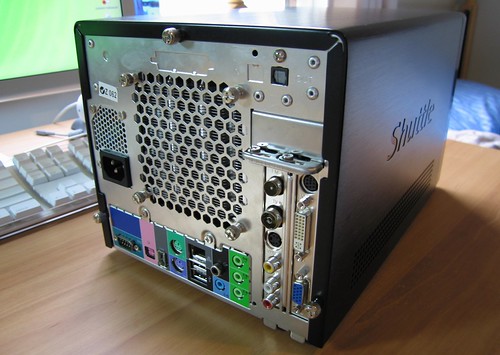 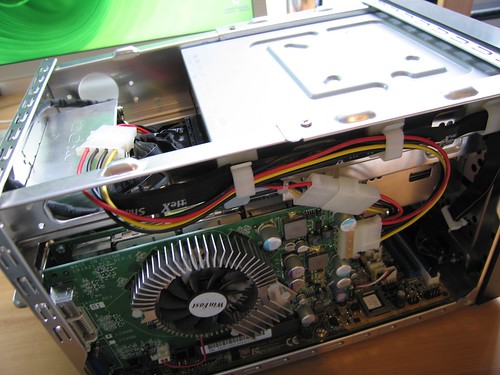 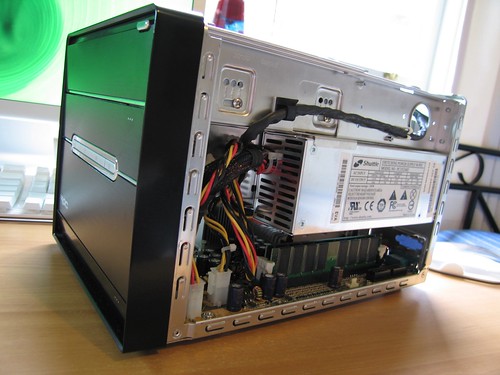 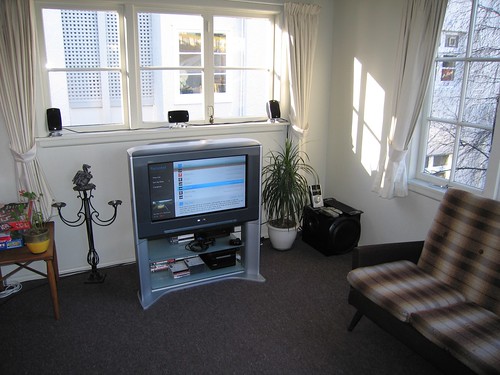 Thats a nice setup indeed as for that sub its too big for those speakers dont you think? hows the sound quality notice not the base lol (sound clarity )

somewhere in the bowels of Texas

Very nice!
I could not deal with over 2 hours to install a hard drive though.
B


SOUNDYTIM said:
Thats a nice setup indeed as for that sub its too big for those speakers dont you think? hows the sound quality notice not the base lol (sound clarity )
Click to expand...

The sub is never turned right up - for normal TV and music listening it sits around 10-15%, for movies about 40%, any more and it can start booming and becomes exhausting to listen to after a while. So as long as you're not silly enough to turn the sub up past what is a reasonable level for the satellite speakers and whatever you're listening to, it packs a very deft punch. You have to keep the price tag in mind

If you want to hear other opinions, just search the web for 'logitech z5500', there are lots and lots of reviews from reputable sources 8)
W

Really nice setup!
I am really surprised that is doesn't get hot with everything packed tightly together. I own a SATA Seagate drive (120 gig) to and if it didn't show up in "My computer" I wouldn't know it was there. It is absolutely silent.

Thanks again for sharing your setup.
B

wishywashy said:
I am really surprised that is doesn't get hot with everything packed tightly together.
Click to expand...

CPU sits around 54 degrees celcius, graphics card core is 55 with 50% fan speed, and the case is around 43. Of course it may be smoking hot somewhere where there isn't a sensor
K

I have dropped my Shuttle ST62k project, because it would not start up after hibernate/standby, so I am looking for another macjÂ´hine. Maybe this is the answer?
Can it wake up after hibernate, and can you shut off/turn on with the remote without problems?

You've made 3 posts about your ST62k not starting up from standby.

2 post mention it wont start up for recordings, this one seems to say that you cannot start it with the remote?

What exactly is the problem, I have a ST62k HTPC and I can bring it out of standby with my MCE remote.

Yeah, mine stays on all the time so it's best you ask James 8)
K

Sorry if I have caused problems.
I just wanted to ask the people in the threads who might know something about the ST62k

There are several problems with this machine. It cannot wake up when there is a recording due. I have tried everything, and messed with the bios and so on. In Microsoft MCE the machine wakes up fine to record, but for some reason not in MP.

In this thread I did not mention this problem, because I thought SHuttle had fixed the problem in this newer machine.
But here I asked if the problem with the un-initialized USB ports exists also on this machine.
When I do the regedit trick on my ST62k, it gives me problems on the USB controllers - making USB-devices unavaliable (for example the remote), until I take it out and plug it in again.
THis is a common error according to MS, which is why they disable the USB-wake-up-trick as standard.

Thanks for taking the time and listening to me