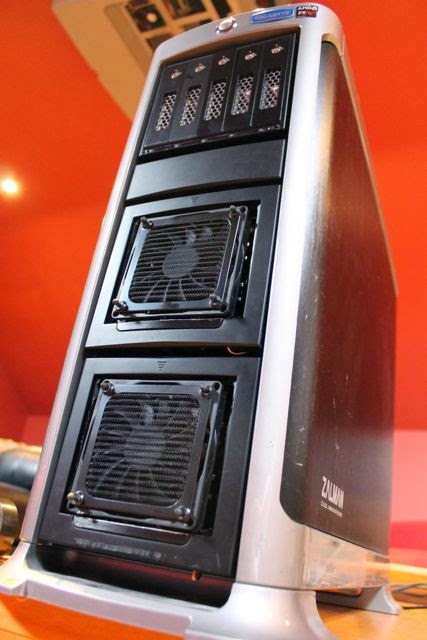 MediaServer8 is an unRAID based storage system which, using virtualisation technology, also incorporates a MediaPortal / ArgusTV server and two MediaPortal clients as well as a whole-house audio system based on Logitech Media Server / Squeezebox. Here's the overview...

Over two years ago, I wrote a blog entry that outlined my objectives in embarking on the MediaServer8 project;

At the time, I had an unRAID NAS system for file storage and Plex serving and was contemplating a move to Windows Server 8. Now, I've got pretty much all of the above set up in a single machine, and more.

I've been interested in whole-house a/v since we started planning our renovation over 12 years ago and I've been through system after system, technology after technology. Some worked well, some not at all. However, all were defined by a lack of unity. I could have a great HTPC system but it wouldn't integrate well with whole house audio or lighting control or mass storage or whatever. Or I'd have a great server solution that was missing a trick.

Now, I think I've found the ultimate solution (for me)

The system comprises a base unRAID storage system running on some beefy hardware.I have a system providing 11TB of parity-protected storage with the potential to expand to 36TB as I gradually replace 1TB drives with 4TB models. In addition, since unRAID made the move to a 64 bit architecture and added the Xen hypervisor system in version 6, it's unlocked a whole new world of potential.

Now, the base unRAID system is not only a NAS system with the ability to run some community plug-ins, it allows the for the creation of multiple virtual systems each with their own discrete tasks. It even allows specific hardware and devices to be passed through to these virtual machines. Here's what I'm running at the moment; 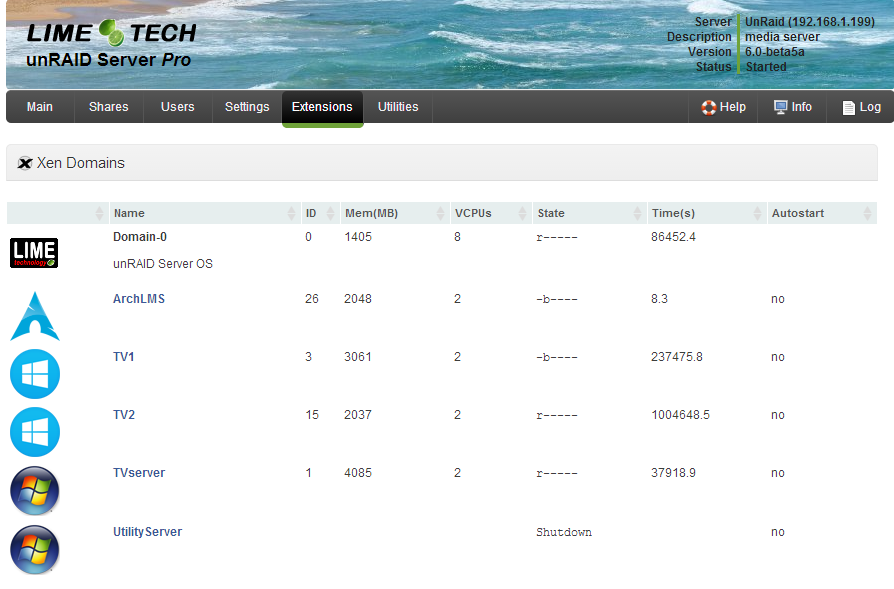 TVServer
A Windows 7 VM that runs MediaPortal Server and Argus TV Server. This system has access to a set of Digital Devices DuoFlex tuners which provide DVB-S2 and Digital Terrestrial services (up to 8x tuners in a single PCIe slot). I've also passed through a pair of Hard Drives as block level devices, one for timeshifting and one for recordings.

There's also an M-Audio Delta 410 sound card installed here and multiple instances of squeezeslave which can drive up to 5 discrete zones of whole-house audio.

TV 1 / TV 2
Two more or less identical Windows 8.1 VMs, each of which runs MediaPortal client software, with audio and video played out via HD5450 GPUs. These are the only feeds to my lounge and living room TVs and the single MediaPortal interface provides access to all live TV and Radio content as well as Tv Shows and Movies up to 1080p. Control is via Windows Media Center Remotes, with wired or wireless mouse and keyboard as a backup.

ArchLMS
An Arch Linux VM whose sole duty at present is to run the Logitech Media Server, the foundation of whole house audio, serving all my music to virtual zones and physical Squeezebox Radio devices. Also serves up Spotify to the Radios. Access is via Telnet. I can add additional functionality to this VM as needed.


The greatest attraction here is that all of this is running in a single box that's using pretty much the same amount of power as my previous standalone unRAID only server. 5 systems for the price of 1!

Centralised storage for media files
In place via unRAID running natively on my hardware with up to 36GB potential by just upgrading hard drives.

Time Machine Backup Server
Not implemented as I don't use Macs as much any more. But unRAID has support for this and it would just be a case of switching it on if necessary.

Work File Storage
Rolled in to general storage on unRAID.

Snatching
Not implemented. I have pretty much enough media between live TV / recordings, Netflix which runs on both TV VMs and whatever physical media I purchase. However, there's no reason why Sickberard, Couchpotato and the rest could not be set up in the Arch Linux VM or a dedicated VM.

Media Playback
Acheived through the provision of MediaPortal Server and Clients. I had originally thought this would be Plex and while that's a great system, it has no support for live TV / PVR which is important to me. MediaPortal has this as well as very flexible configuration capabilities and a good plug-in ecosystem.

The only thing I really miss about Plex is the client / server model whereby watched media is managed centrally. MediaPortal 2, which is in development, promises this so I'm happy to wait.

I would note that I've tried pretty much every piece of media software from Plex to XBMC as well as JRiver and others. MediaPortal does everything I need, looks great, is stable and I've had no complaints from any family member about ease of use.

Whole House Audio
Achieved through Logitech Media Server, squeezeslave software, a multi-channel sound card and some physical devices. I can control the music in any zone from any device or via iOS / Android apps. Works great and is very cost effective.

Live TV Distribution / PVR
Looking back, this was my biggest challenge but the move to MediaPortal has solved this. Ican now have up to 8x satellite & terrestrial tuners feeding TVs in any room via either the TV VMs in MediaServer8 or physical PCs. By choice I'm restricted to Freesat and SaorView but with that and Netflix, I have all I need, and it was a great pleasure to get rid of Sky and save about €500 p/a.

What's next? Well, I'd love to add just one more TV client to the system but I'm out of PCIe slots so can't fit another GPU. I could upgrade my MB so maybe that. Got to get saving though. Apart from that, I think I'll just sit back and enjoy it for a while!
Last edited: June 2, 2014
I

Hi looks nice your setup. Can you show how your clients look, with you kontakt the win8 VM's? Thx and sorry for my bad english.
P

indigo said:
Hi looks nice your setup. Can you show how your clients look, with you kontakt the win8 VM's? Thx and sorry for my bad english.
Click to expand...

The clients are completely virtual. There's no hardware at all, just a HDMI cable from the server to a TV and a USB cable to a hub that connects keyboard, mouse and IR Receiver.

I'll do a post later in the week showing that setup.

Brilliant setup. Im just about to upgrade our home media when we move house. I was hoping to set up a server in our garage and then a client in 4 seperate rooms but wasnt looking forward to the cost of hardware, so if having a VM running through your server works just as well then ill probably switch to this tactic.

No idea if you're still around, but I'd love to know if you've had any issues with a VM doing the TV tuning?

I tried a Win7 and Win10 VM with my TV tuner passed through via Unraid 6 and it would always drop packets when tuned to HD channels via DVB-T2. SD channels always seemed to be ok.