I've been using theRenamer for several years now and always very happy. But it seems that it's getting buggier and buggier and I take it this is because it isn't being developed any longer. C'est la vie.

So now I need a replacement. I've looked at Filebot as this seems to be the standard, but I really can't believe how complicated it is. Compared with theRenamer, it's night and day.

Are there any options for a simpe, GUI application that does renaming and moving for both TV episodes and movies? Ability to automate is great but not necessary. But I'd really rather not have to learn a whole new scripting system and run everything from a console.

Hi.
Maybe you like to try MKV Buddy? It can do a lot more than simply renaming but you can use it for this task. And as long as it is to grabbing metadata and rename files it is not limited to MKV container (also the name may imply this). Only if you want the full function sets like attaching fanart and .nfo to the video file itself, add metatags (as you may know from music this is possible for video too), optimize your video files (remove unwanted audio and/or subtitle tracks, recode them if they are too big,..) and much more you need to use MKV or let MKV-Buddy make MKV out of your videos automatically...
Link is in my signature, in our repository and on Softpedia. If you need help to get started, feel free to ask.

Thanks for the quick reply! I'll check it out.

Thanks. I did finally get FileBot up and running and it seems much easier now than when I started.

A couple of humble suggestions on things that might help the dimmer bulbs like myself in starting up Filebot:
1 - It wasn't immediately apparent to me even how to implement a script. The startup videos and info could take even another step back and say "so where do all these scripts go?" Seeing someone paste a script into the right place for a very simple process would have helped to key me in. Once I figured it out it was easy peasy. But in the beginning I didn't understand that and was dreading writing scripts and figuring out what to do with them. The info is there if one knows what they're looking at, but for those on the green end of the user spectrum, a super-clear statement would have helped.
2 - Following 1, guides starting at that basic level of how to put together a script and what to do with it. I looked at the videos and Getting Started stuff, but I needed someone to do a true idiot's guide.
3 - The Getting Started image series includes one that I think must be from a defunct version. Number 12 in that series is something I could never track down. If it is part of the current release, I still don't know how to get there. Either some words for context or more detailed photos would help there. I looked for that window for an hour and got pretty frustrated.

(edit to note that the most important part I couldn't figure out what moving files.)

Now that I get the program I love it. Really, I'm sorry I didn't switch earlier. But coming from theRenamer, which is fully drag and drop and extremely simple interface, it was a bit overwhelming. I'm not a complete noob, so I expect that there may be more like me.

All that to say, thanks for a great piece of software. If my advice can help make it a tiny bit better for some folks, then great. Otherwise, whatever.

0.
So the problem wasn't renaming files, but setting FileBot up to move/rename files into the standard Plex file/folder structure? That's pretty much FAQ #1 I have yet to find a good / intuitive solution (that doesn't alienate power users).


1.
When you say "script" you mean "format" or "naming scheme" right? Because there's command-line and scripting but that's for advanced users.

The "format" allows for extremely complicated but noobs aren't expected to write a single character of "code". The format editor will give examples / options that you can just click and use. That's in the video tutorial but I guess things are happening too fast in that one. 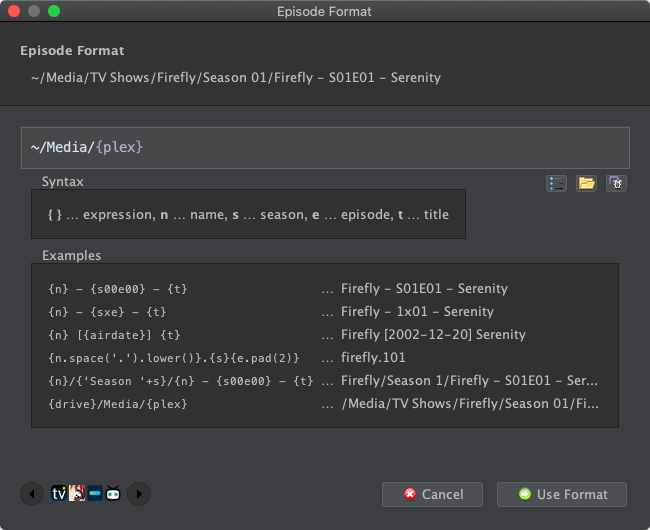 3.
The FileBot Node is a Web UI for the filebot command-line tool / amc script for Synology NAS devices:
https://www.filebot.net/forums/viewtopic.php?f=3&t=1802

You're using the Windows Desktop application, so it's a completely different thing.
You must log in or register to reply here.