Suggestion to use XBMC's XML scrapers for HTTP scraping (1 Viewer)

Nicezia said:
Version 4.0 of the ScraperXML Web Scraper Library has been released and it should work with every XBMC scraper now.


Please note there have been radical changes in the way it works:

at the moment the object to send settings to the scrapers is disconnected as i've put a frontend object for each different scraper type now, the parser itself is a seperate entity (with no public access) Now you acces the scraperParser through their class objects (MovieScraper, TvShowScraper, AlbumArtistScraper)

The movie scraper has two calls, GetSearchResults (Which you should supply with the Moviename, and optionally the year for best results), and GetDetails, which only requires you return the selected element of the item you wish to download info for.

TV scrapers are another story, the scrapers themselves being an elegant and very versitile piece of work... There are 4 function calls that need to be used with it. First there's the two calls to get the tvshow overview, (GetSearchResults, and GetDetails - then there are two more calls for episodes, one to update from the site the list of episodes (UpdateEpisodeGuide) and the other gets the actual episode details (GetEpisodeDetails).

There is a console program in the svn that demonstrates the usage of all types, and what input should go into each.

Will Be updating the Windows GUI Test Program as soon as i reconnect the settings objects
Click to expand...

Haven't added the tester yet, as i'm having problems with scraperXML's http protocol in c#

Runnning on Linux via Mono (Notice there were a few bugs i had to work out on it namely the bindings, but now it runs error free on linux) 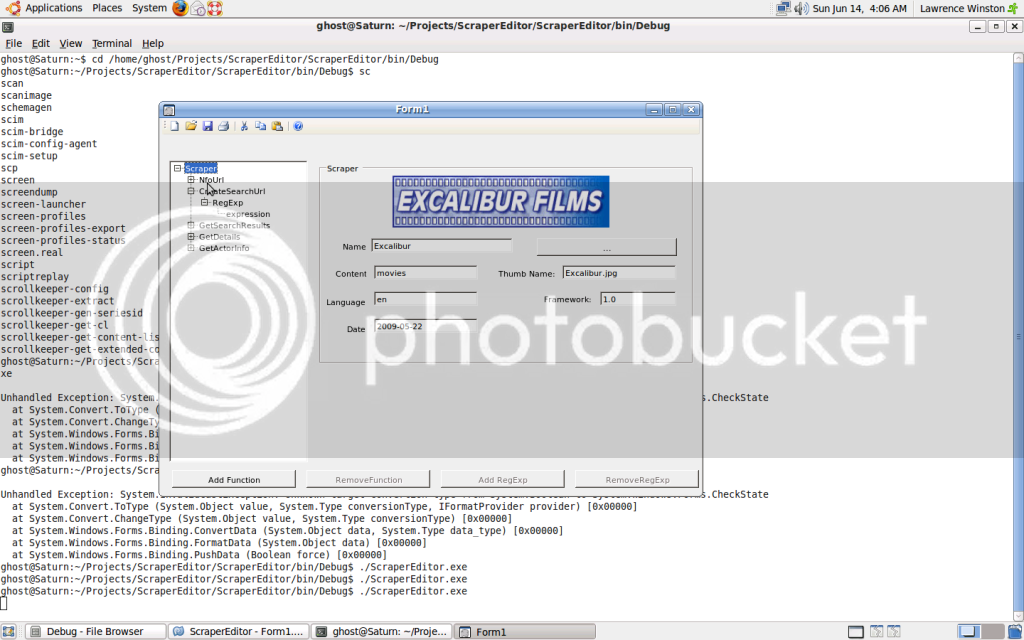 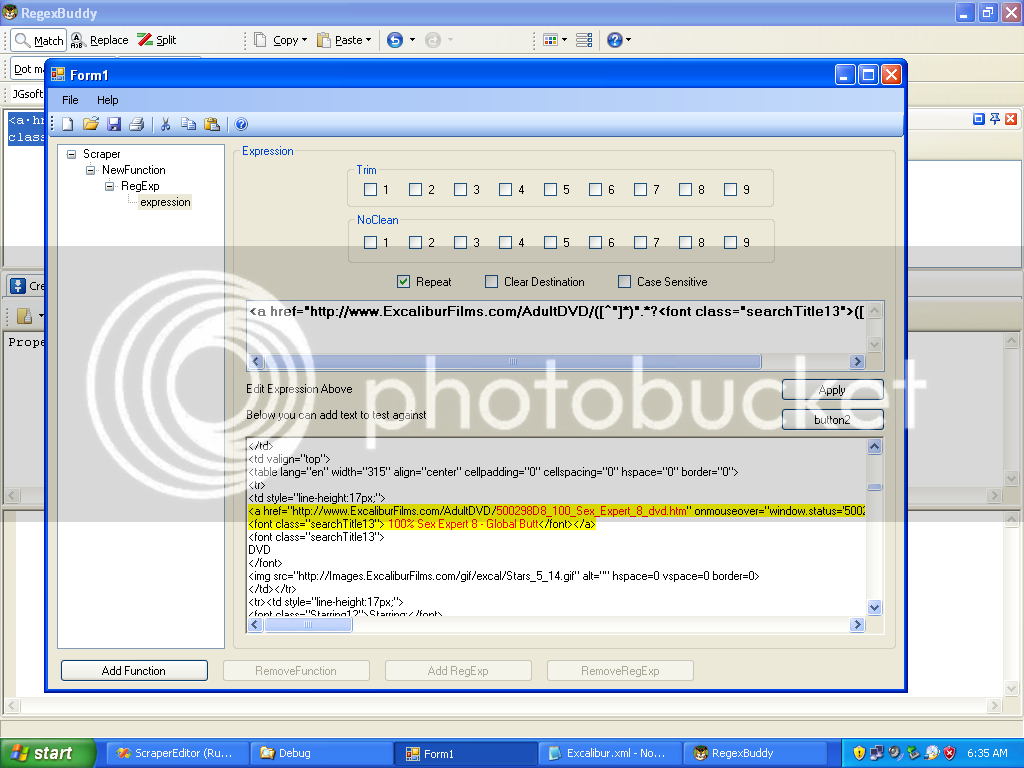 
Just a slight note, use ctrl+v to paste text into box below as i haven't included a context menu for that yet, in the expression box i haven't yet finished the context menu, (which will include common regular expression which will be configurable via an XML file)

and currently only the disk image works for saving, (menu items don't work yet)

just thought i'd make a quick release, (since the basic functionality of the editor is finished, and all i really need to add is perks)

the load image file button doesn't work as of yet.

but this will load edit and save any scraper made from scratch or that comes with XBMC. In it is an enhanced version of the Excalibur Scraper (which gets linked actors AND non-linked actors - and instead of guessing at image names actually goes and downloads images from the actor page)

oh and as a reminder !!!!DO NOT!!!!! use XML entities in the editor, put the pure xml in and entities will be managed on compiling the XML file!
Click to expand...

I appreciate your enthusiasm Gamester17, but I am not sure anyone here is going to jump on board this project...
L

fforde, the cornerstone.scraperengine seems to be very cool.

the issue is that the code seems highly coupled to mediaportal and some 3rd party libraries (nlog, for instance).

is it ok if an effort goes underway to decouple the scraper engine from mediaportal ...

I really dig the dictionary approach to input/output.

please let me know your comments.

The Cornerstone scraping engine has zero references to MediaPortal. It does use the NLog library for logging, but that would be easy enough to change or remove. It is licensed under GPL3 so assuming what you want to use it for is under a compatible licences you should be good. Jump on IRC or send me a PM if you'd like to chat a bit more about it.