Seems that they are supported by FastLED: https://github.com/FastLED/FastLED/issues/66
So using an Arduino board and these leds should work fine .
View signature

Hello Homey
can yo usay me what is your wires size used ?
for power & Data signal.
View signature

azzuro said:
can yo usay me what is your wires size used ?
Click to expand...

12v is better.
I search for buy connector from farnell. But it's an big jungle. With all the reference.
Ps: my devstation is down. PSU hs.

arpan choudhury said:
can you give me the code
Click to expand...

Hey HomeY, can you tell me what size your shrinking sleeve has (and shrinking rate if possible)? Is 10mm enough or too small for covering the LED-strip?
View signature

10mm would be perfect.
I just measured the LED strip and mine is 9mm wide. So 10mm would need minor heating, and 33% shrink would be more then enough.
View signature

Thanks a lot. As my strip is 12mm, I'll adjust it accordingly.
View signature
D

I love these Ambilights, I'm trying to make one myself using my ChromaTab. The ChromaTab (if you've not herd of it) is a tiny Arduino compatible board (just like a Leonardo, Pro mini, or Nano) its so small that it is perfect for fitting in tight spaces so should be great for fitting in to an Ambilight frame so you don't need a box hanging around. 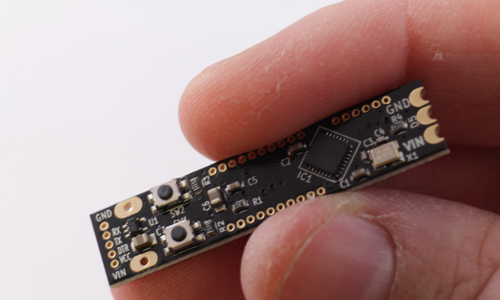 Check it out at:
http://www.carbonfrog.com/Products/CT101V1.html


If anyone else decides to use one of these instead of a Leonardo I'd love to hear about it.

Looks neat, here some things to keep in mind though.

You want your leds to start as far out as possible. Using this ChromaTab you would either loose like 3 leds at the start, or the board would stick out behind your tv. So to get the best result you still would need to use sime wires to connect the leds to the board. In that case you could also just use any of the other small Arduino clones, which probably would be cheaper.
From the site you linked i gather that this board is actually running an ATmega328p. Which is equivalent to an Arduino Uno, and not the Leonardo (which uses an ATmega32u4). This means 2 things. Firstly you cant just attatch it to USB, as there only is UART/Serial support. You would need another little board which would gap this. Secondly with these solutions you are limited when it comes to data transfare via USB. The maximum is 115200 if i remember right. However when you want to use lots of leds (100+) that might be to slow. The ATmega32u4 chips on the other hand do have USB features built in, and they support way higher datarates. So a board based on that ship would be better for a project like ambilight.
View signature
You must log in or register to reply here.
Share:
Reddit WhatsApp Email Link
Contact us RSS
Top