@matthewdllh, individual addressable LED strips usually do not respond to connecting power at all (or in limited form). It is when you drive the data line that the LEDs will react. Also that is a very expensive strip, because it is normally $35 for a 300 LED 5 meter strip, and I paid $20 for 150 LED 5 meter strip myself. On a 65" TV that resulted in 130 LEDs in the end after I cut off the excess, and I'm quite pleased with the sector responsiveness at 4K resolution and was able to get away with a small PSU to power everything.
G

This is my new ambilight project with brand new 2812b led strip. Everything connected almost like in this project.
So basicly: Raspberry Pi 2 + Arduino Uno + 5V 20A DC + WS2812B. Connection to Arduino exactly like on this image: (1000 µF, 25V capacitor and 470 ohm resistor) 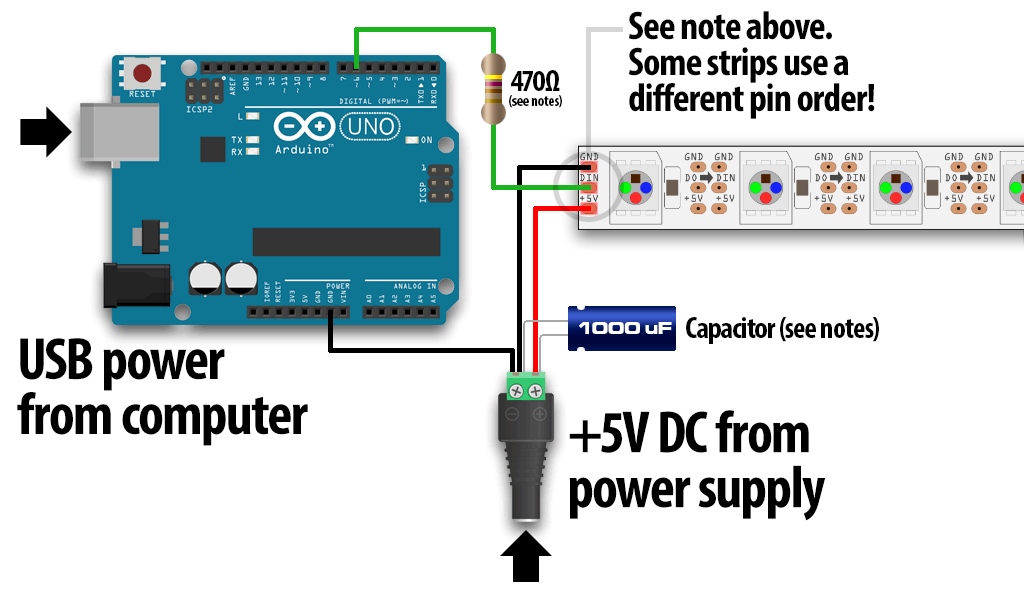 So my problem is: after one day when everything works perfect, 4/5 of my leds shines only white after few minutes ater starting ambilight. This is my 2nd led strip (in previous project I didn't use ane capacitor or resistor and most leds dies day after day...) and I have no idea what could be wrong this time. I don't want to replace the new died leds everyday

@guru88, I have the exact same setup without resistor, or capacitor, and everything has been working flawless for me for many weeks now.

Is your power supply providing a spiked voltage when it powers on? Such a spike could easily damage an LED strip, and no capacitor is gonna save you from that as you require different components to do that, or a better power supply.

To properly test for the spike you need special equipment such as an oscilloscope.

A temporary solution would be to power on the supply with a fake load (or no load), allow it time to stabilize output (can take less than a second), and then connect the LED strips.
G

Should be fine, but those types are notorious for spiking during init.

We're talking like 1/100th of a second spikes, so needs an oscilloscope instead of a multimeter to capture it, unless you have a fancy multimeter like a Fluke with options to detect short spikes. Electrolytic capacitors help smooth spikes out, but that all depends on what the output of your PSU is doing.

As you can see the 5V output on that power supply spikes to 39.6V during init, and then it is bye-bye LED strip.
G

Ok @RoChess so what exact model of power supply you recommend, and what with my current led strip? Will it work after changing PS and replacing (hopefully) one broken LED to another unused LED?

Used 3M-removable sticky strips and aluminium rails with diffusers to mount it, pics @ Index of /pics/AtmoLight

HTPC is running at 4K resolution, and I am very happy with the results, but it required quite a bit of fumbling before I found working Arduino code to make mine work. And I was using the wrong pin, as moving to pin ~11 on mine solved it for me eventually.
T

Used 3M-removable sticky strips and aluminium rails with diffusers to mount it, pics @ Index of /pics/AtmoLight

HTPC is running at 4K resolution, and I am very happy with the results, but it required quite a bit of fumbling before I found working Arduino code to make mine work. And I was using the wrong pin, as moving to pin ~11 on mine solved it for me eventually.
Click to expand...

I've been looking for an AmbiLight solution for months now and I'm still not 100% sure how to proceed. I've looked at the existing pre-made solutions and they do not seem to fit exactly what I am looking for (either bad reviews / bad led quality / bad softwares etc.) So I'm trying to find out how I can build my own.

@RoChess I think my situation is somewhat close to yours.

What I have:
What I want/don't want:
It seems most of the tutorials I could find are about using a RPI as a media center or to process via HDMI. I would like, what would seem to me, to be a very simple solution where I would have Hyperion installed on my HTPC and would connect the LEDs via USB (for sending data). It seems to me like all I would need is a USB to LED adapter with a power adapter to power the leds. Does such thing exists ? If not, could I build one using an Arduino (no soldering ?). Or am I missing something here ?

You can do the exact same thing as me then.

I simply have HTPC that runs a USB cable to Arduino Leonardo, which runs 2-wires to WS2812B light-strip, which is powered separate by a 5V/10A brick. No soldering was required, and the main struggle ended up finding Arduino code that worked (and switching from pin 4 to pin ~11). On the HTPC I use AmbiBox software and it has been working awesome.

So your only issue is finding a Linux version of the AmbiBox software that will allow you to specify capture zones on the screen that will drive each matching LED. If you want to use different LEDs then you might require additional components to drive them, or at the least different Arduino code to control them. Should not be difficult, from a quick Google search I can see AtmoLight plugin for VLC working just fine on Linux, and I'm sure a standalone version like AmbiBox, or an integration with your Linux media solution (Kodi/Plex/etc) exists somewhere.

The reason why I was forced to abandon Hyperion solutions that would work stand-alone for any HDMI device, and not just for HTPC, is that no 4K support exists for the frame-grabber that is required for the Hyperion to understand what LEDs require activation. If one ever arrives I can always convert what I have now over.

As for photos, as linked above, I've only made them of the aluminium angled diffusers that I taped to the back of my TV to hold the LED strip, and did not take photos of the 3D printed box that the Arduino is in, or a video of the final results. What I like about the diffuser strips taped to the TV with special 3M strips is that I can remove everything without leaving a single trace in the future.

Will see if I have time this weekend to make a video, though in the end it will be pretty much be identical to all those other videos on YouTube, and I do not have a 4K camera to capture the 4K output anyway.
G

Well shoot. I am using OSMC as my OS, find it more responsive and flexible for what I am doing since I also have the Pi working as a VPN server. The couple of days ago my LEDs would flicker really bad in dark scenes, almost like a strobe light. Rebooting the PI did not fix the problem and nether did creating a new config file. Decided to check the PSU which is siimilar to the one that guru88 has. Had it for about a year and everything had worked flawlessly until then. It's supposed to be 5v give or take a few microvolts. I checked it with a multimeter and I was getting readings of 12v to 15v! If it weren't because OSMC has a known issue that causes Hyperion to stop working after several hours ( fixed by rebooting the Pi ) who knows if my LEDs would have been damaged. Ordered a new PSU and will have to wait until Monday to see what happens.
Last edited: April 30, 2017