Hello, I requested a year ago access to updated source code, to try to develop something usefull for this plugin, because I think that it is good for the community to have it updated and open. I think that some people may interest in the project and maibe improve it.
When i requested it you said that you had to clean up the code, but it continues outdated in the repository (i think that you are not using that anymore), however, MPExtended Service and WebMediaPortal are updated and open. Please, keep this in mind! Thank you!!
Last edited: February 6, 2014

Dj_Moren said:
Hello, I requested a year ago access to updated source code, to try to develop something usefull for this plugin, because I think that it is good for the community to have it updated and open. I think that some people may interest in the project and maibe improve it.
When i requested it you said that you had to clean up the code, but it continues outdated in the repository (i think that you are not using that anymore), however, MPExtended Service and WebMediaPortal are outdated and open. Please, keep this in mind! Thank you!!
Click to expand...

What about widgets?
Is seems that aMPdroid doesn't have any widgets whatsoever, and you have to open the app in order to control MediaPortal..
I would love to see a widget that I could add to my homescreen and have a quick access to the remote control of my HTPC.

Yatse have widgets for both remote keys and "now playing": 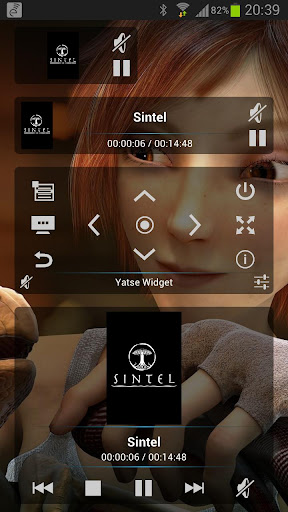 A little history
I have been using mepo since '06, in the first place to go digitally on a cd collection of 400 cd's back then and to replace a broken VCR because I wanted to have just 1 device for all and no physical cd's, dvd's and tapes anymore.
This switch was an instant success and never looked back since then.
For quite some years, the hauppauge remote that came with the TV card was the only control and the TV had to be switched on for every use - even just for putting on music which is used a lot here.
Having to switch on the TV to control mepo, just for music or check the EPG and maybe set a schedule for recording, made it somehow more devious to use.
I don't know how other mepo users see this but turning on the TV just for these simple tasks and then to switch it back off, changed the experience/use somehow.

Then I used MPDisplay++ for some time which was an improvement and I already had some plans to fit a display in the cupboard with a slider so that when not used, it would go horizontally above the HTPC and when used, it was hanging vertically inside, on the front of the cupboard.
Because of some technical difficulties and shortcomings of the MPDisplay++ plugin I stepped away from it.

About a year ago, a tablet was added to the household and I discovered aMPdroid which was a exactly what was missing in my opinion: the ability to control mepo from the couch or another room without needing the TV.

Now and future
I think that a tablet/smartphone is a very widely useable means of control and in my opinion, the best way to go a step further from a 'dumb' HTPC to a real mediacenter system in a sense that somewhere in the house, you have a system which you can control from anywhere so it becomes more then just a system near the TV that you have to be close to use.
In my case, a VPN connection to my LAN is used for other reasons as well so accessing the HTPC with aMPdroid on a smartphone or browser on a pc is also used regularly.

My experience
Having the ability with aMPdroid to put the system in sleep, wake on lan or reboot made it so that in normal use as well in case of an error/crash, the keyboard/mouse became unnecessary and heading over to a pc is not needed anymore.
This improved the feeling of a dedicated system instead of a pc with an application.

Request
I would like to see the app to get more control over/feedback from mepo.

I hope the app will grow with mepo!
P²

@DieBagger
I have recently (reluctantly) migrated from an antique BlackBerry to a Note 4. Amid all of the pain and frustration which normally accompanies such a migration, ampDroid is a ray of sunshine! As mentioned above it is great just being able to schedule TV recordings or pick out music to play without needing to use the TV screen. I have not had any stability problems running it under Lollipop 5.01, but I haven't used anything particularly challenging (e.g. streaming) yet. Of course, even though I only use a fraction of its capabilities, a few suggestions for improvement have occurred to me:

I think the android client needs to support the new Google TV Nexus Player. Kodi already has a very nice working client, love to see the same for MP. This requires a total UI design change, and I think that is a good thing. UI right now is not intuitive, and far too technical in my opinion. To view a live TV channel you need to go through 4 or 5 screens. A simple and intuitive UI like the windows version or Kodi would be the way to go.